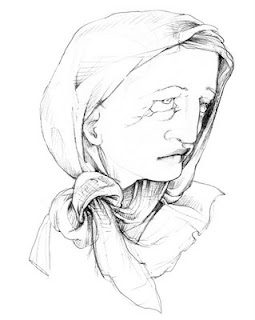 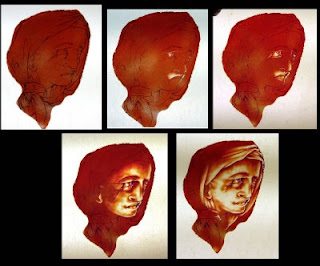 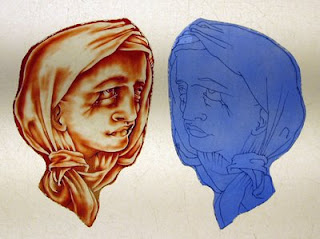 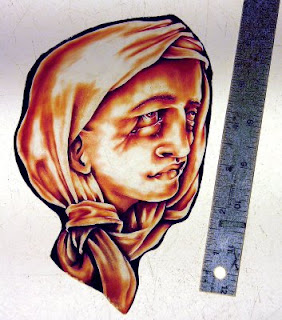 So what’s going on here and can I possibly put it down in words?! Yes, Peeps, a specific demo on a head. I ran out of blue glass for the piece in the earlier technical post and started this instead, and YOU can benefit!
My intention was to repeat the process in the head in the “Stained Glass Lesson” post. But try as I might, the material always talks back. I am using a red that is slightly lighter and this will make the color very different when its done...at least I think so.
I am not finished with the actual head yet, so as I post I am still working on it. It could all get flushed down the vortex of heck, for all I know...

The first photo, god willing I load them in the correct order, is my sketch.

Photo #2 –Left side: are the pieces of red on clear and blue on clear I cut for the head, unsandblasted. The right hand side is the two pieces very lightly blasted (just enough to get a frosted finish) and the red plate is then marked up with a razor pt permanent marker. The final image in this series has a ruler for scale, FYI.
I am not going to do anything to the blue for a good long while...I have found its easier to conceptualize one layer at a time. This prevents my brain from exploding.

Photo #3 shows the head in sequence.
The first head has been painted with a mixture of red for flesh mixed with stencil black (look at the photo of my palette for proportions) and then ALL the excess is wiped off so it’s almost exactly the same red as before. (It might be hard to see in these photos because the color isn’t all that accurate.) So why do I do this paint-on and wipe-off step???? I’m not sure...I swear, it makes a difference—subtle, but visible. On top of this, I paint the trace line (for those who don’t know what a trace line is: I am using a liner brush to trace the marker lines with thin, calligraphy-like strokes.)
Then I fire it. 1210F and down. No ramps, no soaking, just pure steel nerves, baby!
The next four images in photo #3 are of engraving using both the flexible shaft engraver and a diamond file (see previous post for info). The image shows how I gradually remove material to make the highlight values in the face. I use the flex shaft to engrave hard edge lines and pure white areas—and the diamond file for tones.

Photo #4 is how it looked when I felt done enough to stop. The careful observer would note that if I went on any more there might be nothing left! Yes, I have done that! Engraving is “the craftsmanship of risk” to quote David Pye. If you’re not on the verge of disaster are you really alive? Get back to me with your one-page essays next week. The blue now has a marker drawing on it as well. This is because at some point, I intend to engrave and file it as well...just not yet! It is possible to be ridiculously accurate drawing this plate over the red one but it takes practice since the layers are flopped, and the glass has some depth. You will need to be slow and careful if you want an insane level of accuracy. Which I do.

Photo #5 shows the head with another coat of paint. Unfired. I expect it to lose some of its dynamism in the oven but I will put it back in firing #3.

Posted by Judith Schaechter at 1:47 PM

Another stimulating and inspirational masterclass, Judith. You are spoiling us rotten!

This one builds on the last one perfectly. I love that both times you have included something to show us the scale. Not having seen your work 'in the flesh', it's hard to imagine sizes without a reference like a hand or a ruler.

I'm still digesting, so have only two questions so far:

1. You said: 'It is possible to be ridiculously accurate drawing this plate over the red one but it takes practice since the layers are flopped.' Prithee, what are flopped layers?

Are you not nervous about your piece not being annealed? Or is the risk of things cracking up with invisible stresses part of the rollercoaster ride for you?

I'm interested as I CAN'T soak on my ancient new controller-free slowcoach kiln. Hoping the cool down will be gentle enough to relax all stresses and strains.

Thanks for all your efforts. You are a shiny shiny star.

Hi Jx--
flopping a layer is reversing it--so one head faces right and the other left. I wanted the flash layers to be flush...this is a matter of personal choice so do whatever pleases you!

As for the firing--the glass does get annealed! Now, every kiln is different--but the thinness of the glass is what counts--not the area of the surface. The mathematical curve for annealing a piece could probably be accomplished in an hour or so (don't quote me!!!!) but who has the oven that could control that...
Those old gas kilns didn't even have walls so I think a two hour schedule is more than enough. I have only had breakage on one occasion when the glass was very thick and I had a fan on trying to speed up the cooling cycle even more. Don't try that one at home!!

I have just recently been introduced to your work and just found your website. I am completely taken with your process and it has me seeing stained glass in whole new light. I have dabbled in glass fusion pendants and small jewelry pieces but knew there was soooo much more that could be done with glass. My exposure to Stained Glass has been limited to very boring traditional suncatcher type pieces. Now that I have seen your work the sky is the limit! Thanks so much for your blog...it really helps put the process in perspective, well a little goes a long way! I would love to take one of your classes but don't think your summer classes will work. Have you thought of teaching a class in Toronto? Or maybe even Kingston:) A girl can hope, right?

Ur blog gives me so much help its crazy.

Thank you for sharing your knowledge and experience with those of us who strive to follow your original and inspiring path in the Art Glass world. I have a question about the red paint used with stencil black for the flesh tone. Is it a Reusche color? and if so what is the color number.

Thanks a lot!!!!
So Gooood Page..….
NIce post
Mikroenjeksiyon