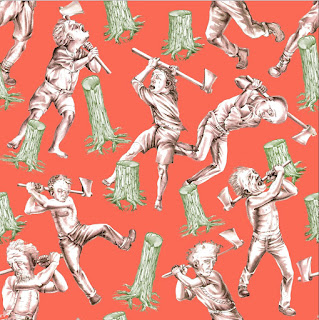 Ok, if you need to get this out of your system first, here's a link to the Monty Python Lumberjack Song
This is a post about a digital image--not a window.  It may become a window someday in some form, but for now, it is an idea for wallpaper.

I had this idea a while back  (do I begin a lot of posts with that line? There's a reason for that...) The idea was to do a chopped down tree--possibly with the person chopping it down.  They could look concerned...a look, perhaps that could say, "why yes, I did read Jared Diamond's book Collapse regarding how civilizations and societies which collapse often do so as the result of ecological pressure, you know, like climate change?? And I did take note of the part which stressed that deforestation is, well, a huge effing problem!"

I did some rudimentary sketches.  Crappy stuff.  Now (endless Covid summer) is a time when I am gathering and consolidating threads to see what going to be a project and what isn't.  So I have this ephemeral "idea-thing", more like an urge, and I have a crappy sketch!  Now what? Urges and crappy sketches do not a project make.
I commenced to try to figure out how to draw a fallen tree.  Not so easy. I mean, what does a fallen tree even look like?  A pile of chaos! I feel a lot more must happen before I touch glass, if that's what's going to happen.
It took a while, but knowing I wanted to be influenced by my own fine self, I worked with an old drawing and customized it into a facsimile of an oak tree.  That took a long time--like maybe a few days working all day, trying to force/coax tree-ness out of an old sketch and magic fairy dust.  I find that getting negative reinforcement on a project can feel dire and devastating.  And at the same time, its kind of a tempest in a teapot, by which I mean, my own skull.  I mean, why on earth do I expect to get a decent image the first few times around? When all my so-called best ideas are not clicking, I hear the siren's call.  Time to rearrange the basement! Or clean the cat box. Or some such. Most of all, I want to change mymind and abandon ship.  Sometimes this feeling is has an incredible gravitational pull.  I know from teaching that this is a real moment for less experienced artists.  It can be really awful.
This is when art making really becomes an act of faith.  Not faith that I will succeed, whatever that means. That's a little too goal oriented. But faith that something interesting will happen if I persist enough.  In fact, one thing that does happen a lot is that I find I create a lot of material I can't use in this project but can be tabled for anther day. And I also find that there are amazing things to be discovered if one persists and resists the urge to change their idea.

As for the lumberjack character, I have a whole file of lumberjack images. I am into the romance of lumberjacks with what I would describe a  de riguer superficiality.  I mean, what do I know of lumberjacks?  I've lived in cities my whole life! I guess I mean I like old woodcuts of Aesop's "The Trees and the Axe".
But yeah, I read Collapse too.
As it happens, I am descended from people, man-people, who chopped down pretty much all of mid-Pennsylvania in the mid-1800's.  Then they moved west, presumably to find more trees to chop, and they chopped all them down too, then, lucky for them, they struck oil in Titusville PA and they all converted to oil men.  My grandfather was a geologist for Phillips 66 which is how my mom came to be from Bartlesville OK.  You see the thread here?  Trees used to be an energy source.  Then they found oil. It was no biggie to just tear down a forest and move along to the next one and tear it down too. But there was no sense that this was leading to wanton self destruction, at the time. No sense whatsoever that the energy industry might be "fueling" an unsustainable mess. Deep sigh....
As for the drawing, I took a bunch of my axe man sources and put them in Photoshop. I never work from life. First of all, I hate life.  Just kidding. I love life!  Life drawing, not so much. When it comes to models, I like action poses, which no model could ever maintain for more than a second.  Interesting art fact: The reason some art is so boring is because when you draw from life, the model has to stay put so all paintings are of people sitting or lying or stuff sitting or lying there...oh my gawd wake me up when its over!  Who draws action poses?  Cartoonists and illustrators.  So the content of Fine Art vs illustration is very much influenced by that fact.  How weird is that? Think about it and submit your 500 word essays in the discussion module.

So, with the lumberjacks, I found about 7 good sources--good poses--and I gave all the source images heads drawn by me. Then!  I switched their legs!  Then I draw them over in pencil   No one will ever find my source images. Except I am kinda showing you here.  But they are now entirely original. And I never once had to get someone to pose in historic costume with an axe.  Yay!

BUT I HAD TOO MANY LUMBERJACKS! What to do?  It became obvious that apropos of obviousness that to put a lumberjack with a fallen tree was too obvious!  And I had seven nice pencil drawings of lumberjacks looking pretty good together, so why not make them their own piece?

And then I thought, because I often do, how about making it a repeat tile?  Because its one thing to have seven lumberjacks in  a row or whatever, and its quite another to have seven million, which could happen with a repeat tile. Yes, sometimes utilitarian design concerns inform concept.  Chew on that, friends.
Beyond that, my, isn't this looking a lot like a statement about deforestation and about the sociopolitical systems we have that depend on such unsustainable practices? (Please forgive me, ancestors!) And doesn't it also seem to be making a statement about (toxic) masculinity at the same time?

Oh yes, apropos masculinity,  I also drew a stump.  But....I had to chop off the roots in order to make the design work.  Who's destroying the metaphorical environment NOW??  Oh the irony.

Here is a post for art students or aspiring artists of any stripe if there are any left after the pandemic. Its about what gets said in critique or about why Art with a capital A can seem so rarefied and/or snotty..

What they really mean (a.k.a. what I have come to understand they mean):
Your work doesn't look enough like what a certain group of people (Eurocentric white hetero males) with certain interests and tastes call Art. Art is narrowly defined as exclusively as possible to protect certain people’s market share, prestige and mystique. And maybe to protect their ego. In short, to protect their status. Please remember exclusive automatically implies exclusion—its right there in the word. The idea of art as something other than illustration, decoration, craft, design, kitsch etc is very recent. And when I say “other than” those things, which are very art-like things, I intended to denote a hierarchical position with Art at the tippy top.  It is really not possible to say art is "the same" as craft or design or whatever, in this conception. That’s the entire point of the invention of the word to distinguish it from them.

We (yes, even artists and aspiring artists) tend to accept that art is "the stuff in museums" (or something like that)  without taking into account how it got to be chosen. "Fine Art" as a thing was invented recently (circa 1500 in Europe) and you, as an aspiring artist should know that. It comes with a set of "rules" and assumptions and there are consequences to playing the game, consequences to playing it your way, to refusing to play it and also to ignorance. If you call yourself an artist, you will have to exist in relationship to this social construction of what art is.

Do I sound peeved?  I'm really not.  I am trying to be completely factual and educational. I am trying to prepare you for life.  This is reality. Is it currently falling apart with pressure from Black Lives Matter, MeToo and other attempts at social justice? We shall see.  Perhaps.  But I still see the criteria in critiques (like “excellence”) being unquestioningly tossed about and what that signals to me is that it’s still a certain group who are controlling the very definition of art in a way that serves their interests.  Perhaps not yours. Sometimes this happens knowingly by actual Eurocentric males who stand to gain the most, but I have ALSO seen it by women, BIPOC, LGBTQ persons in unconscious ways. It is HARD to avoid (or resist or recreate) the mythos of what Art is. But it is a myth from which we will derive everything else: the modes of distribution, the marketplace, the institutions and, most importantly to the aspiring artist, who and what merits their good graces. Unless it is replaced with some other myth. But for the time being please don’t go into this unawares.

It can be really, really specific, too! Certain things have come to be known as more art-like than others.  There used to be an old art school graffiti—I heard it attributed to Tyler, RISD and a number of other schools: “First make it big and if that doesn’t work, make it red.  Or something like that.  So large scale, “expressionistic” brushstrokes, sloppiness; these have become signals that Art is taking place here!  I mean, I find myself wondering about how UTTERLY RANDOM it is that we fetishize brushstrokes in paintings.  Or size.  And any number of other art-like gestures that are more signifier and less anything else at all.  Ok, now I am a little peeved!

I’ve seen a lot of friends and students write themselves out of art because of these distinctions and that’s a pity.

My main thought here is: ask yourself: why is "too obvious a narrative" a bad thing? I am not saying it is or isn't.  Just YOU should decide for yourself.  Then proceed accordingly. Why is kitsch a bad word when some of it is so wonderful?  Why do we think entertainment or decoration is stupid? Are the necessarily so? Why are material and technique considered as separate from concept and message? Again, you should decide for yourself and then proceed accordingly.
Ask yourself are brushstrokes really an important way reveal to your inner soul?  I suppose some may say yes, but some may have found other ways.
And sometimes a cigar is a big honking phallic symbol.