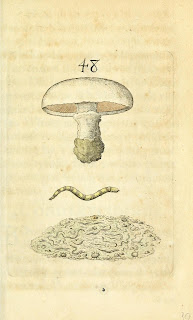 The garden was freaking hard.  All my solutions to the problem “how to draw a garden” are different.  It’s like reinventing the wheel.
Somewhere along the way it seemed prudent to make the garden black and white and the snakes colorful.  Also, I wanted a large plain area for the sky to set off the frenetic garden.
What’s it all about?  It’s an accurate depiction of the time I was left to rot on some desert island full of snakes and had a really peaceful time contemplating the beauty and connectivity of the universe instead.  Snakes are your friends! Yeah…that really happened!  :P
Posted by Judith Schaechter at 11:01 AM 4 comments: