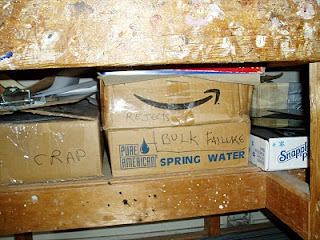 Its been a while!
I don't want anyone to stop chatting up this blog's more arcane topics because its rockin' my world...
but here's a demo in case you are jonesing for one. 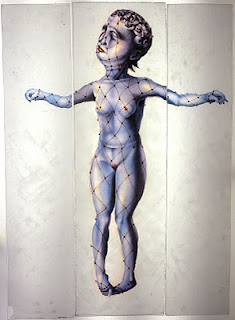 This is what this piece currently looks like on the light table. Her arms aren't done yet, that's why they are blue and not purple. 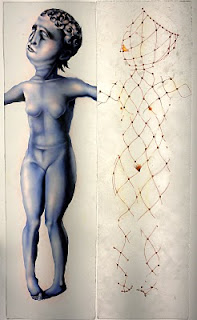 She is comprised of two layers. On the left is St. Just Blue on Clear #11. Very pale. Never underestimate how much color pale tones are in stained glass. The red is Lambert's R/cl 1001b.
About that red layer: people get freaked out about sandblasting "too much". The glass is pricey, yes, but you are paying for the layers, not the color. Sometimes you just have to be brave and sandblast like a maniac. Trust me on this. 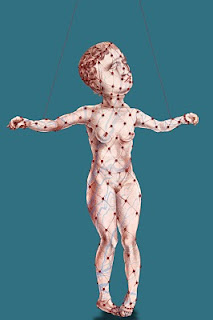 This is the sketch (which I colorized in photoshop just for amuse myself.) 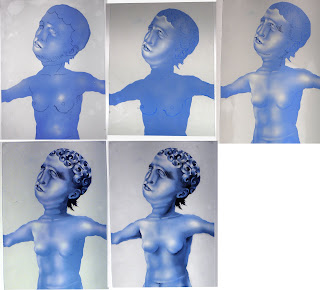 Here are some of the stages of the work: on the top left she's been sandblasted as a silhouette and I made some magic marker indications. I have done a little work with the flex shaft--but mostly I am starting to file the tones into the figure. The top middle shows a bit further along the process and the top right shows all the highlights filed into it.
The bottom row is the two firings I did of the painting. As always I use stencil black vitreous paint. I did only the two firings. 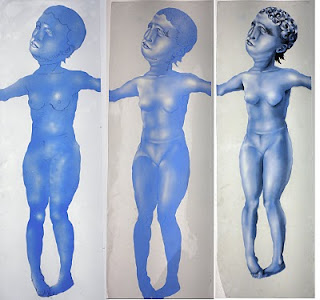 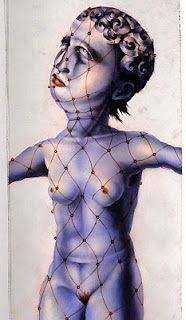 This is a close up of the two layers together. She's purple now because I wiped some transparent red oil paint on her. I want to emphasize that its a teensy tinsy amount...and it has this huge effect of the color. This isn't lightfast. DON'T put oil paint on a window intended to receive UV light (that's THE SUN). This is not a technique that is appropriate for work installed in architecture. 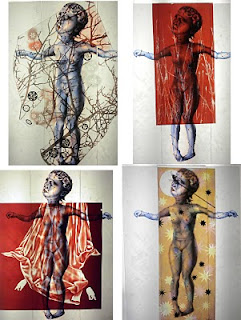 OK--this is important so listen up!!!!!! I don't know how I want these windows to look like finished. I prefer to find out as I go. One of the things that's most important is trying things out in layers. So here are four pictures with sample layers taken from my "Bulk Failure" boxes to see what looks interesting--I'm just messing with colors and patterns here. This is crucial and one can learn a TON doing this. Don't assume you know what a layer is going to look like ahead of time. You don't! Its really amazing what happens and its a lot of fun, to boot.

It will eventually inspire the rest of the piece. Right now, I don't know who she is or why she's wearing a fishnet bodystocking that makes her look like a cheese hanging in the Italian Market. As soon as she's happy with her outer layer, I am certain she'll let me know!
Posted by Judith Schaechter at 2:19 PM 1 comment:


I was reading this blog by an old friend of my family’s. I was fascinated by this particular post in which he discusses the mind/brain problem. Now, I am very interested in anything pertaining to the mind/body because I would say that therein lies the dilemma, the drama, the delight of ART but I’ll get to that in a minute.

It would seem that culture has encouraged a widening of the mind/body gap that has the chasm getting bigger and bigger, like two tectonic plates determined to form continents that will be settled eventually by warring tribes. I have my theories why. To reduce them to a single sentence? I would say we despise our bodies because they DIE—best to focus on the soul which we can’t usually observe rot so we can pretend its eternal. The Industrial Revolution didn’t help with the mind/body split problem as it reinforced the idea of physical labor being the realm of the poor, the uneducated and unfortunate and entirely a separate thing from those who were rich and schooled and could live an intellectual existence and a leisurely life thinking deep thoughts. I hate that. Especially as a craftsperson. Of course, I work with my hands and I can see clearly its not just the head that is intelligent and that hand skills are a vast body of knowledge—and one our culture undervalues to the point where we are in danger of losing it altogether. Let’s see where that gets us shall we? Outsourcing, anyone? Its gonna be a bitch if society collapses or the bombs drop.
Mechanization certainly enabled us to imagine our thoughts as being entirely divorced from our senses and our physical existence. Everyone knows their soul doesn’t look nasty like a spleen. It looks like this. Or, I guess, like this! (Perhaps they could rename it the “Penile Gland”?)
OK, bear with me here—I will try to relate these concepts at some point!
Because I am evil, I asked my students at NYAA to define art. Not in the personal sense, but the universal. Cuz I’m just nutty that way, I assume commonalities—that all peoples have always made artistic stuff and I wanted the students to think about some sort of baseline definition.
I then gave a power point about the definition I came up with... which I have since decided was a bit overly wordy and I have simplified it. Before I poison you with my definition however, I shall insert an absorbing graphic so you can come to your own conclusions without the influence of my own incredibly persuasive mumbo jumbo.
OK—done? Please add it to the comments!
My universal, all encompassing definition of ART is thus: the marriage of form and content.
I have also asked my students at times, to define creativity. I define it, not as “an original idea” but as creating relationships between disparate ideas. Now if Art is the marriage of form and content its sort of the ultimate union of two incompatible ideas.
Think about language: that’s putting ideas into forms too—no wonder most of my students answered the art definition as some variation on the idea of communication. I actually think that art’s communicative power is sort of a side affect and that we have verbal cognition for a reason!! Art is no replacement. It’s more like telepathy than talking. And its very personal, one to one communication—it’s not preaching (lest it become propaganda)
So, to marry physical form to mental content sounds easy. Hahahahahahaha! Joke’s on you. Artists know that it’s damned near impossible to do in any original way or with any finesse—you non-artists try it sometime! Get back to me with pictures, please.
But my point here is that the artist is re-enacting the greatest creative connection in the universe. That of spirit to matter—content to form. Perhaps it’s why religious people can see artistic creation as being in competition with God-the-Creator. To actually, successfully turn the intellectual, the emotional, and the inspirational into a physical THING is pretty miraculous.
The aware (sometimes even enlightened) human soul is packaged in this gloppy, wrinkly object... Where do they actually connect? Where does the soul begin and the brain end? I’m guessing in that synaptic leap. If it’s something scannable then maybe someday we can diagnose artists!
It’s enough to make you religious....
Posted by Judith Schaechter at 9:30 AM 14 comments: 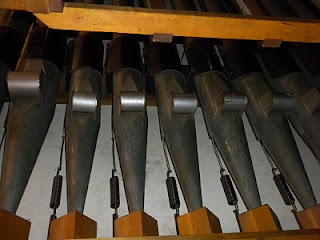 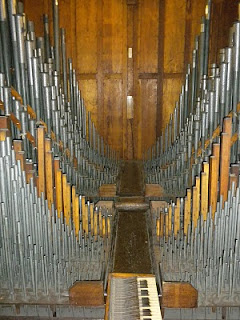 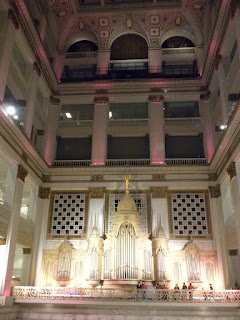 If you are from Philadelphia you are probably familiar with the organ in what used to be Wanamaker's (now a Macy's)
A friend of mine and UArts alum, Scott Kip, is part of the team that works restoring and preserving it and he gave me and some friends an inside tour. Its five stories of rooms--very labyrinthine and compressed in terms of space. It is very much analogous to being inside a body as it seems to have a circulatory system, a nervous system, lungs (so MANY lungs! its pneumatic, after all) and intestines. Just an incredible place.
Click here to see the album of pics.
Posted by Judith Schaechter at 1:40 PM No comments: