This Is Not a Pipe 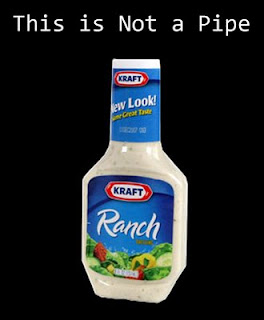 Here's the lecture notes for a presentation I did on "Authenticity".

I. I was watching TV the other day and I saw an ad for Kraft Ranch salad dressing. The tag line was a boast that it’s made with “REAL INGREDIENTS”...I’m much relieved because I’ve been worried about salad dressings being made with fantasy ingredients....
In case you wondered what real ingredients they used, they are: Soybean oil, water, sugar, blah blah... phosphoric acid, xanthan gum, polysorbate 60, etc. All of which sound very convincingly authentically real to me.... 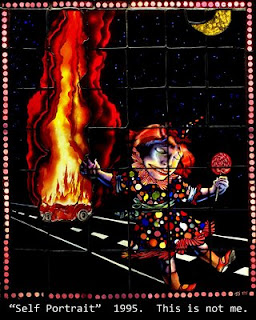 II. It seems people are interested a lot recently in this so-called “authenticity”, and its become a buzzword for credibility, integrity and all that is good and pure in art. I guess it means we’re a lot more interested in inauthenticity, too, no? (And we should be.... I’ll bring this round full circle by the last inning, I promise!) What’s the big deal...has everyone forgotten “art” is the first syllable of “artifice”? Or that Picasso once said: “We all know that art is not truth. Art is a lie that makes us realize the truth.”?
“Authenticity” certainly has a bright, shiny veneer of righteousness. We (in the USA anyway) are so unbelievably suspicious that artists are all trying to pull one over on us; it is totally logical to seek some kind of stamp of assurance. The disconnect between maker and receiver is an ever widening chasm full of potential embarrassment, money loss and lunacy.... It makes sense to demand “honesty” and “authenticity” yadda yadda as the folly of “The Emperor’s New Clothes” teaches us.

III. The most obvious problem with the need for authenticity is that it seems to be impossible to judge by just about any yardstick. Is it a quality in the work itself? In the artist? Is a quorum of positive response required for agreed upon “authenticity insurance”? How can ANYone presume to judge the authenticity of someone else’s artistic voice?? It seems to me, the most talented have a gift for imbuing their work with enough intelligence, empathy and vision that it delivers a persuasively “authentic” emotional experience in the viewer--whether or not the artist was such themselves. And the poor souls who are just schlubs but really decent good people and can’t make a convincing art statement, oh well...they create what appears inauthentic art despite their good intentions!
This reminds me of a major gripe I have regarding the deification of “Outsider Art” as some type of indicator the maker is pure of heart and unsullied by corruption...as opposed to someone who, oh say, LOVED ART SO MUCH THEY RISKED THEIR ENTIRE FUTURE BY GOING TO ART SCHOOL? Excuuuuuuuse me! Judging the motivations and purity of an artist by their circumstance is truly a game for suckers. Don’t even get me started.


IV. I imagine that when people talk about “authenticity in art” they define it as something like “authentic artists are true to themselves” or “true to their own vision” or whatnot. But how on earth can that be gauged? What criteria does one use to measure that?
Never mind the ludicrousness of imagining that a life without compromise might actually be attainable in this time/space continuum.... Most people I know aren’t all that firm in their self-awareness. Most people, artists included, are muddling through a life of impressions, fluctuating desires, unpredictable subconscious feelings, and unresolved conflicts. To what part of one’s self is one supposed to be true? Honesty, in this case, is relative. Most people don’t know themselves well enough to be true to themselves in any realistic way. Those who do know that they change by the minute, that there’s no consistent “self” unless your development is severely retarded.
Perhaps more importantly, I think that when an artist is inspired.... truly inspired, their sense of self entirely disappears...there’s no ego there.... When artists discuss the ephemeral phenomenon of inspiration, they use terms like they feel “at one”, they “dissolve”, “expand” or they are “merely the conduit for some greater power”. So being true to oneself is a ridiculous demand on our part—we want way more than that from our artists, actually.... Assuming we prefer art that’s inspired rather than begrudgingly made to just slog through some assignment, commission or to kill some time. 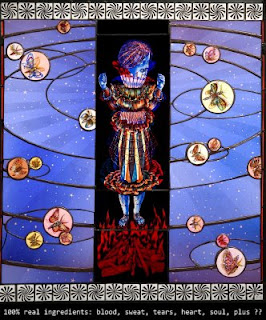 V. The second thing I imagine is that we see the idea of “authenticity” as opposite to being a “sell-out”, which is another ambiguous, emotional term that we may or may not agree, means, “making art to make money” or “pandering”. But what if they are an authentic sell out type of person? I bet Thomas Kinkade just gobbles down his own steaming heaping portions of bull. Even if he doesn’t, how can you say he’s not being really very, very true to himself? ‘Cuz I think he is most certainly being true to his tiny little vision and his goal$$$. He’s made of 100% real ingredients! With an emphasis on “greed”! I don’t think I can come up with a single instance of inauthenticity that really sheds any light on anything or means anything. 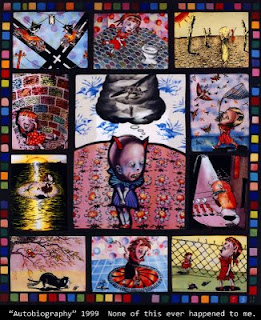 VI. Then there’s huge issues of originality-- is “inauthenticity” copying? 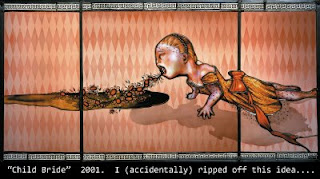 How much copying is too much? Because I take it for granted there’s value in a free marketplace of ideas... 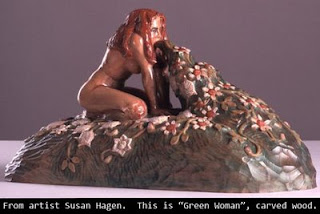 In addition, there are great works that are done in homage or obsession. In music, think of tribute albums; in fine art, Bacon’s haunted Popes, Picasso’s use of African masks. It is acceptable to advise young art students to copy the masters —what about collages, samples (in music) or just being strongly influenced? What about memes, wherein common themes arise in a whole bunch of people’s work at the same time? There’s unintentional copying like George Harrison and “My Sweet Lord”...
Performing arts are an entire area predicated on re-presenting works of another. From cover bands to tribute bands to the orchestra...no one is demanding the performer be the author. In some cases, the truer to the original the better—so interpretation is not always desirable...sometimes it’s about faithfulness. Which is a lot nicer a word than “copying”!

Is being part of a tradition a sign of authenticity or inauthenticity?
How original is enough? Or “how transformed form the source is enough?” 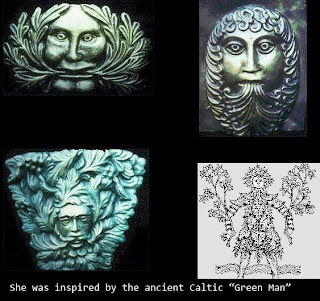 Phrases like “there are no new ideas”, one “stands on the shoulders of giants” and “good artists borrow but great artists steal” are a pretty good indication that the idea of influence is accepted.

But, of course, no one likes a copycat unless they come out the winner. Copying always seems like a risky proposition to me—either the copier outdoes the original or they underscore its glory and reveal their own failure to come up to par. 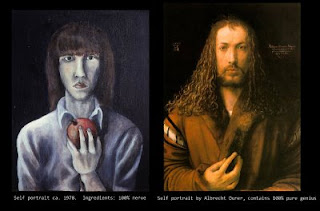 The idea of originality taps into our culture’s feelings about the importance of innovation—Modernism brought us to the idea that boundaries must be pushed, out with old, in with the new. Toss out that baby along with the bathwater—we want a new baby too! Imitation bad bad, innovation good good. Maybe this is where the artist’s big ego can be of assistance!

VII. Authenticity is going to be especially a problem for artists because they deal in images and imagination. Reminder to the world: images are not reality and are never going to be. They are (at best) re-presentations of such and therefore inherently not “authentic” things. The emperor is neither dressed nor naked—he exists only as an idea. This is not a pipe. 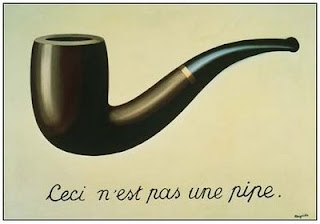 Further...all art is inherently inauthentic because it is not beholden to any system of thinking. Art as we know it, is free from the constraints of empirical proof, religious dogma or even common sense. It’s about imagining. Its about impossible dreams, going places you can’t go any other way.... So it’s a paradoxical—diametrically opposed to the idea being true to anything. Art that is true to the idea of art, or “art for art’s sake” is the wonderful absurdity at the heart of all this...

Great art? It just bypasses ANY niggling doubts and makes one go gaga. If it’s sending one into paroxysms of joy, guessing games about “authenticity” are irrelevant.
Great art isn’t ”thought provoking”—its thought annihilating! It’s awe-inspiring. If an artist successfully completes the creative circuit, if their inspiration inspires YOU, then doubts about authenticity just dissolve.
Art not about 100% real ingredients. Unless you wish to dress the emperor in....salad dressing! 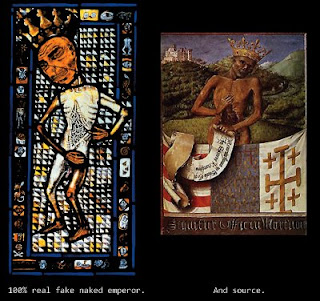 Posted by Judith Schaechter at 5:26 AM 4 comments: 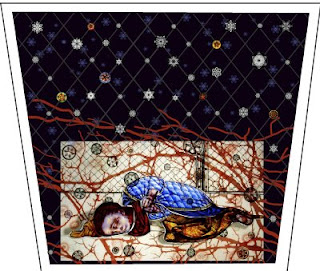 First of all—thank you for all your input.

Initially I was going to make the middle row middle... I got the following feedback regarding extending the fence into the dark area: it flattens it out too much, its distracting etc. I liked it for those reasons but since it would be technically very difficult, I wasn’t married to it and was really toying with the notion decided to drop it. Too many of my trusted advisors were unimpressed with that one...
As of today.....I am making the one with the blue snowflakes and the red branches—no fence. Or at least, as of today, right now, I am...! Everything’s subject to change based on mood, weather, capricious whim, indigestion...whatever. Coincidentally (or maybe not) that IS the winner. I have already done the branches and they are much more subtle in the glass piece than on these sketches.
I actually wanted to make the one with the red snowflakes but making red snowflakes and red branches would mean I would need to find a way to distinguish the two-they would be very same-y same-y...but I liked the idea of making a cold scene with unexpected, warm colors. Next time...
FYI: Both middle and bottom row right would be darned near impossible to make and also I found them too cluttered.

I learned some things—mainly that I don’t think I found a solution that’s really the best for the piece...I really believe its possible to come up with something that would be a clear runaway choice...but it eludes me now and I need to move on. Second of all—there’s technical considerations—not the least of which is the difference between looking at computer sketches and the real thing in real scale. Anyway—I really appreciated all the feedback and input. It was helpful!!!!! I hope people like this Frankenstein monster when I finally finish.
Posted by Judith Schaechter at 7:52 AM 4 comments: 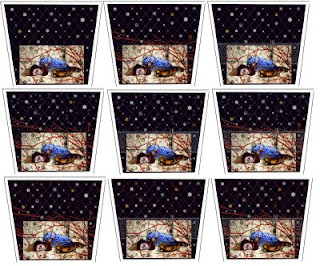 Here's nine options for resolving my piece--I am curious what people like best and why....but you're not allowed to be mad if I don't do whatchoo say!
Click on the pick to enlarge.
Thank you!!!!
Posted by Judith Schaechter at 11:20 AM 15 comments: 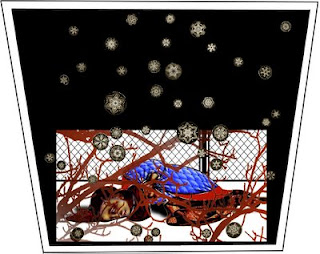 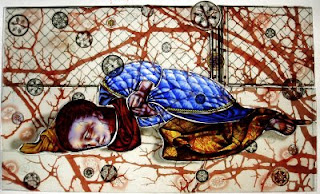 My piece changed, mutated...hopefully evolved...but its sure not done yet!...here's the new sketch and the central panel so far in glass...
Posted by Judith Schaechter at 6:18 AM 4 comments: