This piece is supposed to be funny…. I mean, a real ax wielding maniac would be anything but funny, but c’mon…sometimes you just gotta laugh or you’ll perish from the godforsaken horror of it all, right?

I should know, I have seen every episode of Forensic Files…more than once!  I own a Ring doorbell…I have known fear of the monsters that lurch in the human soul (including my own).  So, this time out, I choose to laugh a bit and I hope you do too.

It all began innocently enough. How to depict something about deforestation that would speak to the issue in such a way that people wouldn’t nod their heads in robotic liberal agreement or send them running to their climate change denial pals for e-vilidation before they even considered the nuances of the message.

I figured I would draw a sad lumberjack.  I would draw a person who regretted being sucked into and trapped in a system that was perfectly acceptable until it wasn’t.  I drew a lumberjack…and then another…and another…all in all I drew a bunch of lumberjacks.  Please see my previous post about the drawings here.  In it, I discuss my Pennsylvania family history (Wood hicks, the lot!) and other things that I won’t go into again but may explain some of the motivation further.  Ultimately, I decided to use all the lumberjacks in a single image.  Probably the single most clever thing I did was trade the stumps in that last "final version" for logs.


Logs.  Logs are so…long and cylindrical…. How did a piece about climate change come to be about toxic masculinity?  A few words before I get into that.  I hope the humor of the piece functions like this: I hope it makes the piece, instead of preachy, into a loving ribbing.  I have no desire to lecture anyone on the odious consequences of “toxic masculinity” of which, I assume you are already intimately familiar.  I have no desire to paint all males with the same brush. I LOVE MEN, OK?  YOU ARE NOT ALL THE SAME, OK? MEN AREN'T NECESSARILY EVIL, OK? For the record, I deeply believe malefolk are amongst the deeply damaged and are every bit as much persecuted by rigid ideas of gender as anyone. The patriarchy perpetuates a system potentially fatal to all persons, although some get more swag before they die of stress related diseases like broken hearts.

Who in class doesn’t see a connection between deforestation and systems of male dominance?  Anyone….anyone?  Bueller?  Ok, good, so I won't spell that one out for you, despite the fact that it is absolutely central to the piece, in my mind. 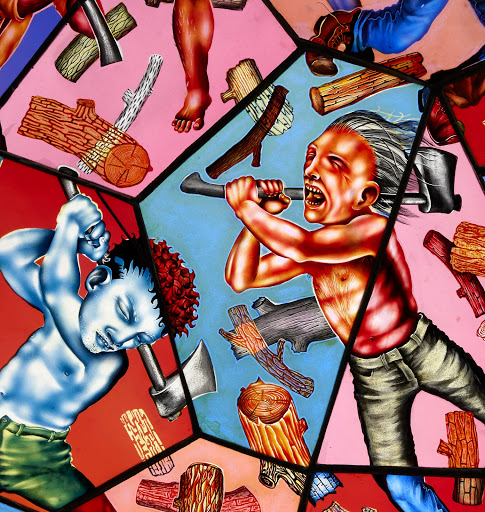 Another thing I will only mention superficially is the creative struggle. Whenever someone looks at a finished art work, it appears as a fait accompli, but each one comes with its very own mid-life identity crisis! Of all my pieces (239 at this point) maybe five did not come with a crisis.   I assume this is common amongst artists and I think it results from two contrary things I  "learned" (more like absorbed) in art school: 1. that inspiration is an unnecessary luxury strictly for amateurs and 2. artists should always be incredibly inspired. OY VEY! Which is it? Both and neither perhaps? What do I do when my idea, which was so rapturously excellent one day becomes a vile and pestilent congregation of vapors the next? I have learned the following.  The issue is not with the idea or the piece!  The issue is with my vision--and I can sometimes regain that vision if I try.  Yes, sometimes an idea has a shelf life.  But more often, I am just imposing my mood on an innocent set of starting points.  Learn from my mis-steps, grasshoppers! Learn to identify when you are intruding upon your own creative process! And yes, this piece was no different.

Back to maniac with axes. The design, like many of my pieces lately, is close to being a repeating pattern, like wallpaper or fabric.

I like the idea that is only implies a repeat while failing to do so perfectly. Its like a little secret between you and I.  I could make it repeat perfectly if I felt like it.  Many fabrics and wallpapers have imperfect seams, and contemplating those mis-registrations gave me much angsty joy as a weird little kid.  It was like finding out Santa was actually my dad or that the Wizard of Oz was a snake-oil salesman and yet: happy endings abound! Comforting to know that the world doesn't spin off its axis when the prints don't register right and I, in turn, offer that up to you.

Why imply a repeat at all then?  Well, in this case I feel I am on solid conceptual ground. One way we learn societal gender roles is by our environment.  Some years ago, a friend of mine (a gay man, for what it worth) papered his spare room in 1960’s cowboy wallpaper intended for use in little boy's bedrooms. I was impressed by this multivalent act of irony, tenderness and nostalgia; this nod to a time when one could innocently assume this wallpaper was somehow not going to possibly perpetrate violent brain scrubbing on human souls.  I am serious here….People learn a LOT MORE from wallpaper and fabric and dishes than they do paintings!  Right?  Because they live with that stuff!  They see it day in and day out…its damned inescapable! The art museum only holds sway on special field trip occasions…wallpaper is your nanny; fabric is your babysitter, you literally see it more than TV (if you have wallpaper or printed fabric or any pictorial domestic goods)…. all the time spreading its pervasive pernicious, subterranean messages of darkness and assumption.  When people say things like “white privilege is the veritable air we breathe” (to give but one example) this is what they mean.  Long live the ALL-POWERFUL crafts!!!  Influencing your children a thousand times more than art can ever dream of! No wonder artists are so jealous! So yeah, check out the unintentionally political but vastly influential 50’s and 60’s wallpaper!  They had cowboys, policemen, spacemen (and spacegirls too, yay--it wasn't all dreadful!) etc.  So why not ax wielding maniacs??? It seems only appropriate to include them in the canon of male role models. In fact, they seemed conspicuously absent.

Nods to Virgil Marti who did it first. (And William Morris who, in his way, was also subversive with wallpaper).

A little housekeeping: yes, yes, a thousand times yes, I know they are not using the axes properly.  Thank you, social media!  I wasn’t trying to produce a treatise on proper tree chopping posture.

Finally: I am begging you to read this book.

Posted by Judith Schaechter at 12:00 PM No comments: