Sometimes a drawing does a mitosis.  (Mitosisizes?)  Well, the thing split itself into two pieces somewhere along the line.

I had this notion to do an old woman barfing.  Yeah, I know, not really a new idea for me...I am deathly phobic of barf, so it always seems a fresh, relevant take on life...especially in these political times.  So I had my usual Photoshop mock up and stuck in a folder for later.

Later turned out to be about a week ago.

Let's see: along the way a lot of changes happened, things morphed, things stretched, other things contracted...and in the end this was the drawing I made.  In my mind, I was making something about ageing...  I struggled with the barf--mainly I was thinking..."what does this even mean?" and "how will I render barf this time"?  And those two questions killed it for me.

I guess I had always thought about contrasting an abject action with the signifiers of wealth and power--a rich cloak, embroidered robes, lace and pearls-- you know, when I was a kid going to the Boston MFA, I used to love those Rococo portraits of noblewomen.  Maybe someday, like at my PROM, I can wear a dress like that!  And oooooooooh lookie how well the artist renders silk!  Can I please drown in lace collars, pearls and jewels for one minute of my acne-ed pathetic puberty?

Anyway: I wanted to reference that lacy stuff...I have a long history of drawing princesses and queens.  When I was a child I drew frowning queens all the time--read into that what you will.

I have done a few frowning queens as an adult too!  So I added a crown and sceptre. I also added a giant sneeze cloud in the first sketch (which is not in the final drawing but if I do decide to make this a window, I will probably include).  Well, everyone these days will see that as a giant cloud of covid spreading itself around and of course, covid is mostly affecting those who are unable to avoid others--and wealthy folks can mostly avoid it, but they are every bit as vulnerable to it as a disease.  Especially if they are older.

So whole I definitely was thinking here about privilege, about class taking a pratfall--but I was still also thinking about ageing.  I didn't want this to be a piece wherein its easy or simple to hate the powerful and laugh at their downfall just because. I want to depose certain structures more than anything, but dehumanizing your enemy is always going to end up dehumanizing yourself.  So I wanted some sympathy for this character.

I also thought she had the wrong face.  The original face was graceful and beatific--too accepting.  So I changed the face and that's when the mitosis thingie happened.

VERY quickly, I took the old face and stuck it on a body and it was magically just right.  How often does that  happen in the creative process?  JUST. ABOUT. NEVER!!!!  So that was exceedingly pleasant!

And here she is: 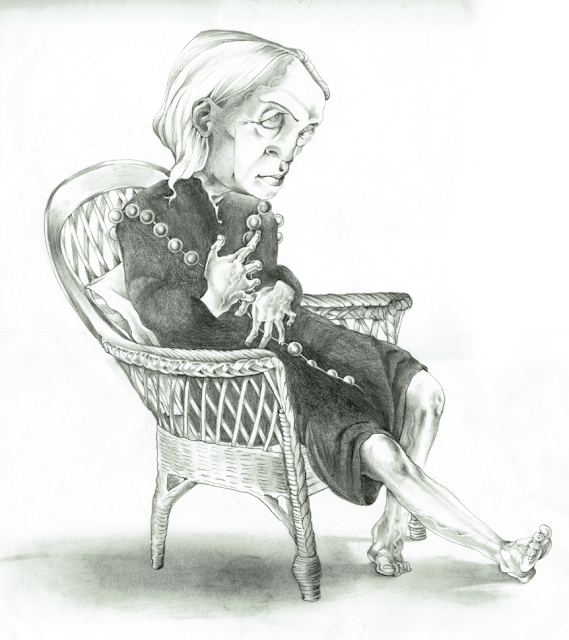 Posted by Judith Schaechter at 2:05 PM No comments:

Email ThisBlogThis!Share to TwitterShare to FacebookShare to Pinterest
Labels: drawing 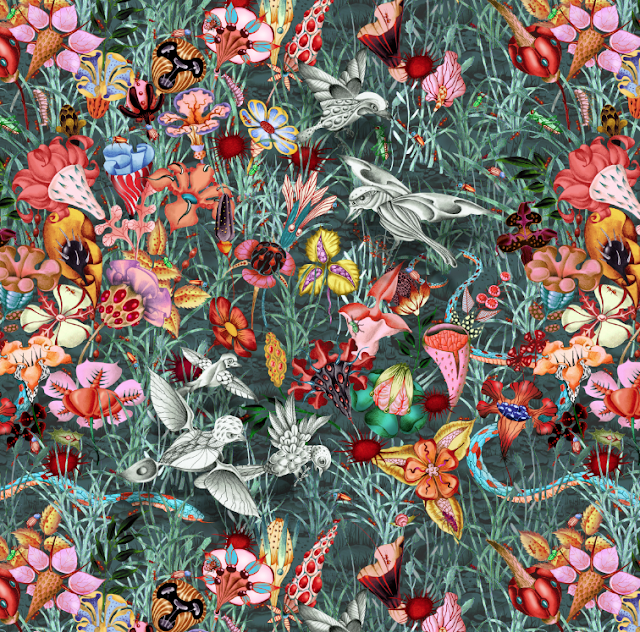 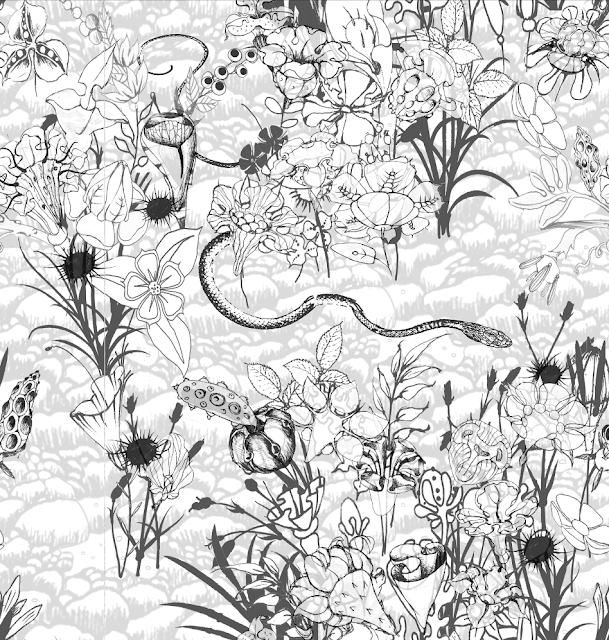 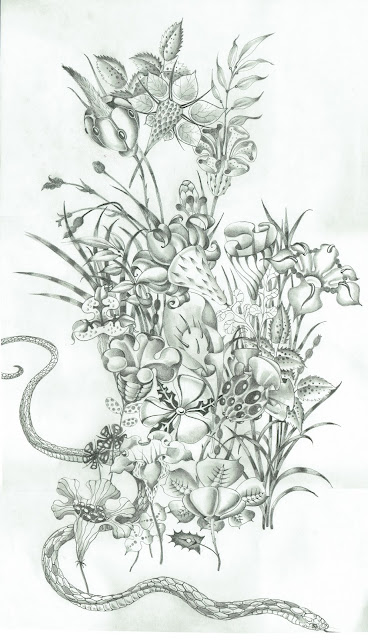 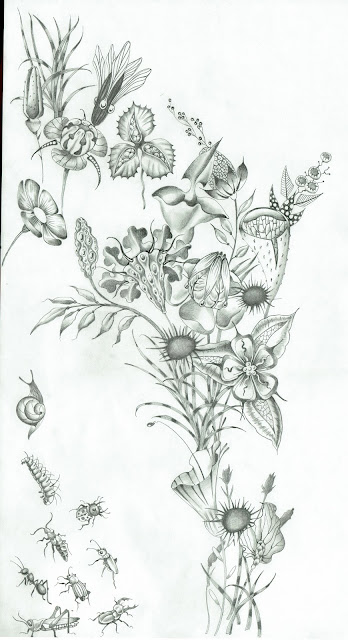 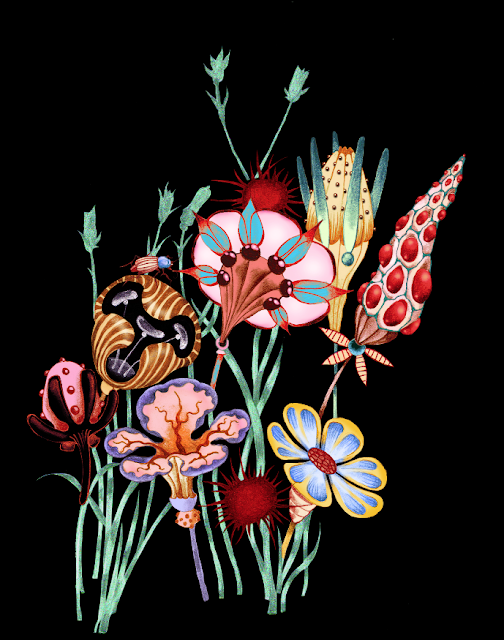 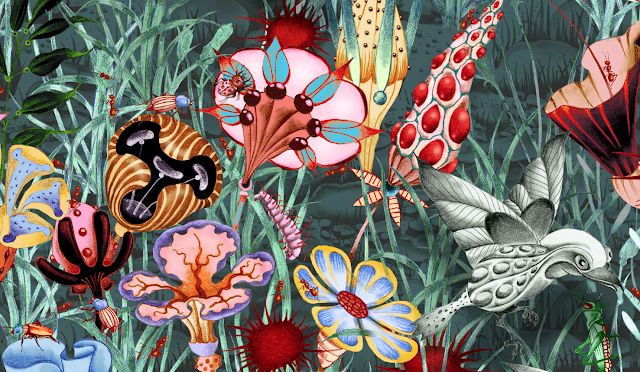 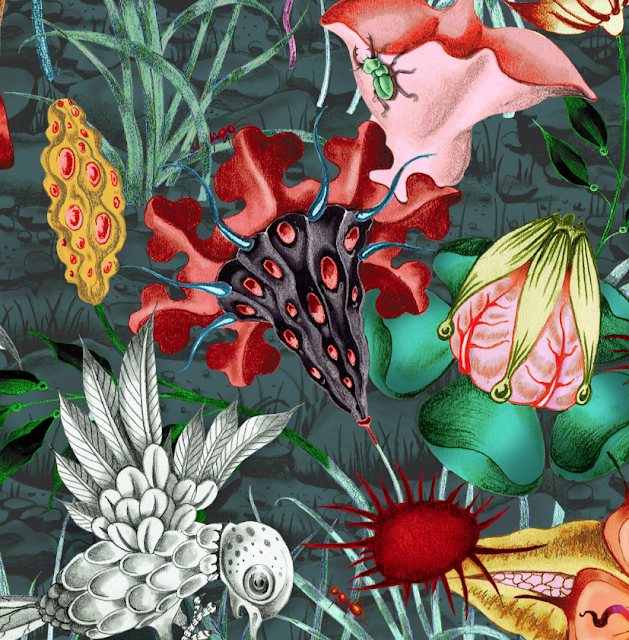 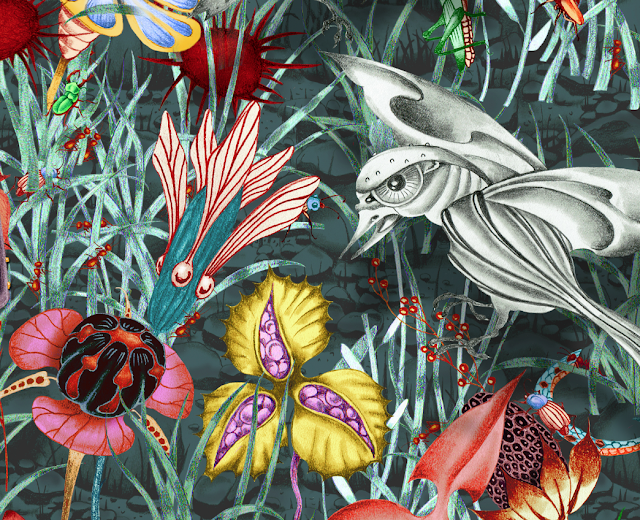