At some point, I think in 2017, I decided to do a few painted rondels.  Why?  Because they are fun, fast and easy!  Or at least sort of. (More on rondels here) The medium on all three is vitreous paint.  Vitreous paint is the term in the stained glass bizz for glass paint which fires on at about 1225F and comes in about ten drab versions of grey, black, brown and blah.  While a lot of technical hooha is enabled by the whole subject of the how to use vitreous paint, the fact is you can be very, very low tech with it as well.  Mix with water to your desired consistency, somehow put it on the glass (brushes, perhaps, but hey, you can finger paint, spray it, dab it on with a paper towel, whatever, with it if you want.)  Then you stick it in a kiln and bring it up to temp.  Then cool it down.  It’s not tricky.
You can add stuff to it, like gum Arabic, which helps it stick to the glass or you can skip that. You can mix it with various oils instead of water, or vinegar or turps.  Whatever—do your own experiments!  As your glass instructor I can guarantee one thing with certainty: something will happen.
Exciting glass shop talk: vitreous paint is not the same thing as enamels, which are colored and fire on at a different temp.  I don’t use them, so I have nothing to offer here.  (99% of the color in my work is generated by engraving flash glass.)
As for painting method, the rondels have sandblasted areas.  The “Immigration” one is all sandblasted, “Meadow” just certain flowers and the figure and “Demon” just the character.  I paint in stages, here is a link that will explain it.

In addition, these rondels incorporate silverstain.  Silverstain info here:
General tips
Ken Leap wrote a book which explains everything in great detail
And he has a pdf here

As for the rest of the three windows, the painting technique is the same.
So that’s the shop talk section of today’s lesson except one last very important thing: I am working with a part time assistant, the lovely and wonderful Karisa Gregorio, who gets credit for much of the cutting of the glass.
Now for some thoughts on the pieces in general.
Having made the rondels, I stored them away until such a time as a resolution for how to use them was revealed to me.  It is exceedingly rare that I have a complete plan for what I am doing at the outset.  Au contraire!  I usually am feeling my way through the process and I don’t wish to force conclusions on these budding, gestation “idea things” before they are ready.  Instead of imposing some idea or plan on them, I prefer to wait and let them tell me what they want.  Sometimes that can take years!!  (I keep lots of parts in progress in Tupperware containers.)

Now, someone near and dear to my heart likes to tease me about my use of copperfoil instead of the traditional method of assembling with lead.  As it happens, I was trained in art school to use lead.  My teacher, Ursula Huth, was in line with many stained-glass makers in her philosophy that lead is beautiful, historical and full of artistic integrity while copper foil is for amateurs and charlatans.  So, I certainly got the message about what she thought was the ONLY way to go about assembling.  I have heard it many times since.  (I stick with copperfoiling for a few reasons: 1. It is more suited to my technique of layering. 2. It is super strong, despite what some people say –read more here: https://jancikarts.com/the-copper-foil-vs-leaded-technique-myth/
3. It can look very beautiful if you do it well.)

Anyhoo, I decided, owing to the teasing and all, that I would show him!  I decided to make “Immigration Policy “and subsequently “Meadow” and “Demonology”, with traditional leading to prove that not only could I do it, but I can do a decent job of it.  Leading is unforgiving and difficult.
A note about the design of all three windows:  being teased about leading is only the tip of the iceberg.  For some reason, there are a lot of people in the field of stained glass who do not consider me to be part of their profession.  Now I suppose I could say “well who cares what they think!!!” however, I feel it is important to my work that it be understood in the context of stained glass history.  Without getting too deep into it, one of the main inspirations for my work is the history of the medium.  I am constantly looking at historical work.  Both the medium and the message of stained glass is at the very core of every piece I do even if what a layperson sees is mostly the subject matter of the picture.  So, it bugs me to be excluded.  I gather my work seems a bit to radical, both in terms of technique and subject for hard-line traditionalist to stomach.

These three rondel windows, therefore were conceived to be very, very closely allied with the Baroque secular windows which incorporate black, white and silverstained rondels into a matrix of quarries (diamond shapes with weird little pictures on them) or, in the case of “Demonology” bullions (round shapes.)  In “Demonology the idea for the colored bits in between the bullions comes from this window:

More thoughts on the pieces individually.  And please note that if I share my interpretation of the so-called meaning with you, it should not preclude you from coming up with your own, which   might be very different from mine.  I strive to be open ended in my imagery for this very reason.

“Immigration Policy”
Although the title refers to Trump’s policies, which disgust me, the piece is possibly about something else.  I make these images in some kind of verbal-free fugue state.  That’s my new word for “intuitively” which I understand is off limits in artist’s statements owing to its vagueness and overuse.  I hope “verbal-free fugue state” will explain itself.  Suffice it to say, I am not sweating over messages, meanings, or interpretations.  I am actively trying to go back to an age when I was able to make pictures without all kinds of layers of analysis.  My feeling is I will analyze it LATER…like at the opening!
I was called to task by a good friend and wonderful glass  artist, Sasha Zhitneva, on this one, who is a dog lover.  She was pretty much horrified at the tragic scene, as would any normal. compassionate human, I would think--so what does that say  about me?  And had it been anyone other than a friend I might not have taken the time to think about what an image like this means…I mean, I am a HUGE animal lover…what on earth could drive me to create such a thing?  1.  The need to express my horror at how humans treat animals 2. The need to express my horror at how humans treat animals and 3. The need to express my horror at how humans treat animals.  I hope you understand now.
I also believe: the dog will never drown as this is a 2-d image and not reality.  Neither will the dog be saved. It is stuck right where it is in perpetuity.
I do not care about the people on that ship.  It’s all about how, in their vanity, they have harmed an innocent animal.  The piece could also be about habitat destruction, global warming…etc. 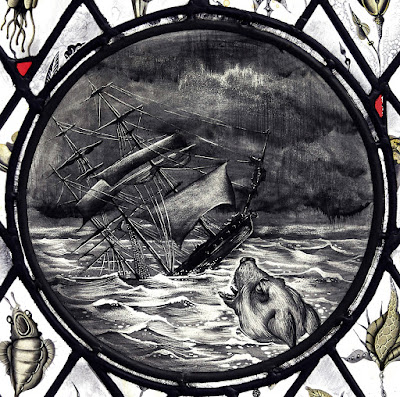 “The Meadow”
The title was supplied by Astrid Bowlby!
This piece was one in a series in which I strive to create a human figure but simultaneously avoid doing the thighs.  Thighs are not only a problem section of any actual body, they are also boring as all get-out to render. So by planting her in a meadow, I could cover them with stuff.
I was trying to suggest either a child at peace resting in a lovely overgrown meadow or a dead body.  Your pick.

“Demonology”
…originally called “Trump Election Commemoration Plate Design” when it was just a rondel as a joke.  First of all, shout to Rick Moody whose bookprovided the title “Demonology”.  (He is a friend, I asked his for his blessing on stealing his title.)

Well, does this really require any explanation?  Who among you hasn’t felt this way at times??
One of the things inspiring this was my long abiding admiration for artists of the northern Renaissance like Bosch, Breughel and DavidRyckaert.  But of course, also the marginalia in Medieval manuscripts which is very imaginative and not bible-related, creating moments of hilarious juxtaposition, considering that it IS a bible that well-endowed, misbehaving in the naughtiest way pagan thing is appearing in (which some scholar could probably put forth as an obvious precursor to Bosch and the like.  He’s so often presented as coming out of nowhere….)

MANY artists have tackled the theme of “The Temptation ofSt. Anthony”.  Why?  I know why!  Because it’s an excuse to do all sort of fun stuff with impunity.  It’s the fantasy sci-fi occult art before modern times.  Anyway, “Demonology” is my contribution to that tradition.