ESP Work on Exhibit Opening May 23!!! 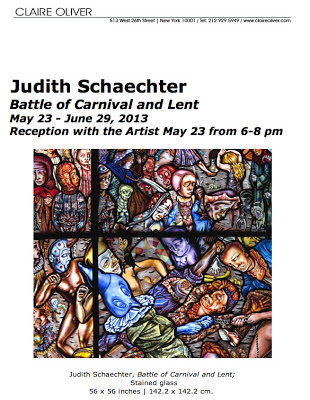 The Battle of Carnival and Lent, Judith Schaechter's new exhibition at Claire Oliver Gallery, tackles one of the most  fundamental struggles known to man, the war humankind wages between good and evil.  Dancing on the psychological border between spiritual aspiration and human suffering, the Artist questions the association of an environment of confinement/reflection in the name of self betterment and the harsh realities of the physical experience of imprisonment; She is  speaking about the 'prisons' we all encounter, be they mental or physical.

Schaechter's title window in the exhibition (and the largest in scale), inspired by the 16th century Brugel painting with the similar name "The Fight Between Carnival and Lent", contains 96 figures (almost all previous Schaechter works  contain only a single figure)
locked in a mythic battle between virtue and vice.  Depicted here by somber monks and garish clowns, hilarity and mayhem seduce impulse control; no blood is spilled in the Artist's rendition; here, softened by humor, we see the constant battle we face between our will, our desires, and our choices.

Inspired by the history of Philadelphia's notorious gothic castle-like structure,  Eastern State Penitentiary, where they were on temporary exhibition, these 17 works draw on mythology, the Bible, and even famous works of art from ages past.  Schaechter's archetypes struggle with an angel on one shoulder and a devil on the other, exploring in turn the stories of Atlas, Prometheus, Noah, Icarus, Mary Magdalene and Andromeda.

Along with the figurative/narrative windows, there are a matching number of purely decorative patterned works which Schaechter calls "militant ornamentalist", a nod to the great strength of 13th century European cathedrals, such as Chartres.  Although ornamentation suffered in popularity during the Modernist period of art history, its power to move people has not been diminished.  One has only to look to the great traditions of Islamic or Asian art to see the hypnotic and spiritual relevance ornamentation has.

Elisabeth Argo, Curator at the Philadelphia Museum of Art, says of the work, "When I saw Judith's new works, my thoughts went to Guernica, Bruegel and Diego River's murals on industry or Otto Dix's paintings looking at war.  She's (Schaechter) looking at this moment and the issues of humanity and those artists were too."

Says Schaechter of these works: I have strong feelings about this work appealing to those who are in transition, those who have known pain, grappled with despair.  The parallels between cell and cathedral go beyond just appearances.  In a church the windows are charged with profound meaning; the "windows" here are more than a mere "ray of hope" for the churchgoer and incarcerated alike.

www.ClaireOliver.com
Posted by Judith Schaechter at 10:26 AM