on the light table 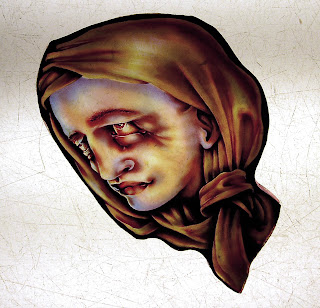 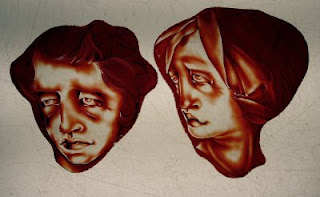 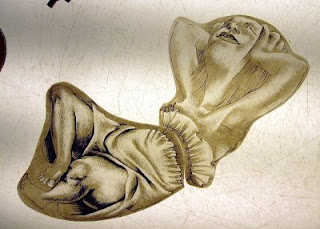 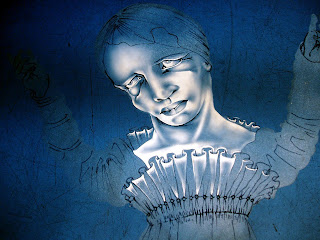 One: The demo posted some time ago.  Still pending.... (along with the Cold Genius albatross debacle)
The second image:  two redheads I started the other day.  (the lefterly one is a revisit of a head used in a piece called "Mother and Child"--its one damn difficult image to translate from drawing to glass for some reason...)
Third down: Another version of the crouching figure from the last post (which was a study--a small piece intended to lead to something more "grand" at some point). I've had many version of that crouching figure in my sketch files--this new one is the original version with her arms raised in the manner of one responding to one hell of a migraine....in fact the file is called "migraine halo".
Finally: The blue engraving is "Mad Meg".  This is a Saint-Just turqoisey blue flash that just begs to be engraved.
Posted by Judith Schaechter at 3:51 AM

Your figure distortions remind me of Eric White. I've got a couple of lithos from him. He's cool.

Your work is amazing. I'm glad I found you.

The first head has come on since your lesson. You showed how you did the red layer. Are there now three - red, blue and pink?

These small pieces of work in progress are incredibly helpful, as well as interesting. Never thought I would be able to make faces, but one just kind of formed itself yesterday.

I heart Mad Meg! That Prussian blue is beautiful. Did you know that pills containing Prussian Blue can be used mop up radioactive poisons like thallium from the bloodstream?